Types of East Africa mountains do vary based on their formation as described in most of the geographical books, well the nature of Africa holds some which are seen to be vampire-white, some with waves of white snow down the adjacent the craggy steeps, some are sky-stabbing pointing in the clouds with deep crater lakes on top, some form up to stand with peaks like those of harpoon tips shrouded to form sheers engrossed in a ghost-grey mist structure.

East Africa holds both volcanic, block and fold mountains and all these are accessed and seen with a man’s naked eye, the voluminous serrated mountains loom in a distance to form unique vegetation covers attracting for a human kind to enjoy a creek of bed of roses on the countryside.

We have explored most of the African countries, Our last Mountain Hiking tour was a 3 days Safari Hiking Nyiragongo Volcanic Mountain, we visited one of the Voluminous Volcanic Mountains, we had to foot towards this Pleistocene feature, all the African Safaris we prepare, we give it a try to set up fire and enjoy camping in the green silent hood, we observed Mountain Nyiragongo – a volcanic dome with fire flames stinging into clouds, it seemed flour – white and brooded higher elevations. The un explored vicinity here is a mouthwatering adventure.

To summarize it all, all the East African mountains fight us back with colder freezing climates as we hike towards the higher elevations, one can observe that, the mountain summits tend to be abandoned by ecosystems, however lower elevations are squeezed with different wildlife and plant species like ferns down the rocky defined edges crashing into a chasm that follows silence below the boundaries.

Volcanoes can either be mountains or hills, usually having a cup-like crater at the summit, formed around such a vent from the ash and lava expelled through it. The Volcanoes are formed when a plate is pushed below another plate, or at a mid-ocean ridge or hot spot. At a depth of around 100 km, melting occurs in rock above the slab and forms magma that reaches the surface. Then, when the magma reaches the surface, it builds a volcanic mountain, such as a shield volcano or a strato-volcano. The magma does not have to reach the surface in order to create a mountain: magma that solidifies below ground can still form Dome Mountains, such as Navajo Mountain in the US. 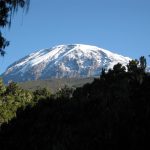 East African Fold Mountains: Fold Mountains occur as a result when two plates collide, this results to shortening along thrust faults and over thickening the crust. As a result, the less dense continental crust floats on the denser mantle rocks beneath, resulting to the weight of any crustal material forced upward to form hills, plateaus or mountains. And thus the continental crust is normally much thicker under mountains, compared to lower lying areas. The rock can fold either symmetrically or asymmetrically.

The down folds form up the synclines and the up folds anticlines; in asymmetric folding there may also be recumbent and overturned folds. The Jura Mountains are an example of Fold Mountains.

East African Block Mountains: These are East African mountains formed by the uplift of blocks of the earth’s crust caused by faults in the crust, a seam where rocks can move past each other.

When rocks on one side of a fault rise relative or adjacent to the other, it can form a mountain. The uplifted blocks are Block Mountains or horsts. The intervening dropped blocks are thereby termed as graben: these can be small or form extensive rift valley systems. A good example can be seen in East Africa, the Vosges, the Basin and Range Province of Western North America and the Rhine valley.