Visit Uganda Lake Kyoga a dry creek bed full of winning Adventures, Uganda Lake Kyoga insights arresting momments in this vicinity. The 1,720km squared by area is a shallow lake that opens its elevation to 1,033 metres. The victoria Nile plungs via the lake making its way from the Uganda’s largest lake Victoria, waving to Lake Albert. Kyoga prominently forms part of the Great Lakes System. 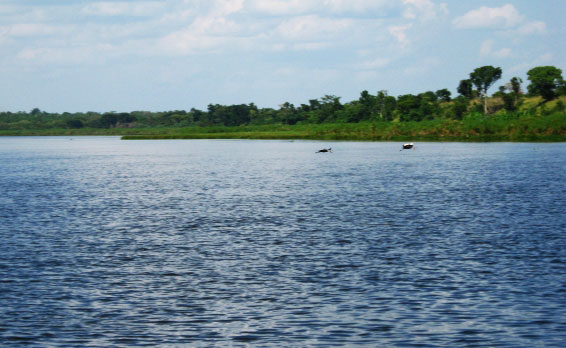 Lake Kyoga, sometimes its spelt as ‘kioga’ is a prominent feature, large shallow lake found in Uganda. The jubilating lake wins a depth of about 5.7 metres, On your Uganda Safari, be informed that most of Lake kyoga’s part forms 4 metres deep. Well the other best places that would be good for swimmers are covered with water lilies, water hyceinth, and papyrus reeds. The lake Kyoga boat drive enthrills your vigor to the rewarding floating islands formed up by the papyruses, they drift between the adjacent permanent Islands

Nalubaale Power Station in Jinja regulates the main inflow from Lake Victoria. Has its other source of water in the Mount Elgon region on the border between Uganda and Kenya. However, while Lake Kyoga is part of the Great Lakes system, it is not itself considered a great lake. It can also be noted that most of its part on the swampy shoreline is covered with water hyacinth and papyrus. The latter, forms floating islands that drift between a number of small permanent islands. The lake can also be seen surrounded by extensive wetlands fed by a complex system of streams and rivers.

Well, way back, the rampant El Nino rains that were full of floods in 1997–98 are believed to have resulted in exceptionally high water levels as well drifting of the adjacent rocks. The whole emulsion forced the large islands of papyrus reeds to dislodge on the lake thus accumulating at the Outlet pointing into the Victoria Nile, A key to note is that, this blockage caused the water level to become even higher, flooding about 580 square kilometers of the surrounding land and resulting in population displacement and severe socioeconomic damage.

Later, in 2004, the Egyptian government granted Uganda a gift of 13 million USD to streamline the flow of the Nile at Lake Kyoga. The Lake kyoga vicinity is now seen attracting Many tourists who come here to adventure in many spot activities like spot fishing, acuatic wildlife, game drives, Swimming, Sun bathing as well as having a relaxed safari holday in Uganda

Uganda Lake Kyoga Map and Directions, How to get here