Mountain Gorillas are the most splinted apart wildlife Species you need not to miss to see on your Uganda, Rwanda and congo Safari. Visiting the large giant species, more often described as ground-dwelling primates that are predominantly herbivorous apes inhabiting the Immensely old ancient trees sculpted by time and revered by generations of local people commonly in the central Sub-Saharan Africa. 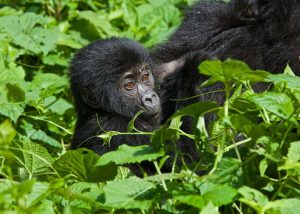 The genus Gorilla is divided into two critically endangered species: the eastern gorillas and the western gorillas, and either four or five subspecies. They are the largest living primates. The DNA of gorillas is highly similar to that of humans, from 95–99% depending on what is counted, and they are the next closest living relatives to humans after the chimpanzees and bonobos.

The closest relatives of gorillas are the other two Homininae genera, chimpanzees and humans, all of them having diverged from a common ancestor about 7 million years ago. Human gene sequences differ only 1.6% on average from the sequences of corresponding gorilla genes, but there is further difference in how many copies each gene has. Until recently, gorillas were considered to be a single species, with three subspecies: the western lowland gorilla, the eastern lowland gorilla and the mountain gorilla.

There is now agreement that there are two species, each with two subspecies. More recently, a third subspecies has been claimed to exist in one of the species. The separate species and subspecies developed from a single type of gorilla during the Ice Age, when their forest habitats shrank and became isolated from each other. Primatologists continue to explore the relationships between various gorilla populations. The species and subspecies listed here are the ones upon which most scientists agree.

Best places to go on a Mountain Gorilla Safari Inculde; Bwindi Impenetrable forest, it’s most often visited on a Uganda Safari, our clients love other near by activities that include visiting the first man to live in the forest, Bwindi forest Pygmies, Community Visits, Nature walks, Visiting the Bwindi Caves, Birding, seeing the local traditional doctor among others after your Mountain Gorilla trek. The safari can be customized to include Visiting near by Savannah game park like Mburo National Park, Queen Elizabeth National Park among others.